Two major milestones were reached at the Maywood site recently. The first was the demonstration of a technology that could be used to separate contaminated from non-contaminated soil to reduce the volume of soil requiring offsite disposal. The second was the successful cleanup of the remaining private property to be addressed in Phase I of the project.

Soil Processing Technology Demonstration
The demonstration took place from August to December 2000 at the government-owned Maywood Interim Storage Site (MISS). The separation process involved two components. First, soil was run through a gravel separator to screen out rocks, debris and larger soil particles. The remaining fine soil particles, to which radiological contaminants are known to attach, were then fed through a radiological sorting system that continuously measured radiation levels in the soil stream. The soil was then directed through mechanical gates that diverted it to various stockpiles based on its radiological content. The gravel separation and radiological sorting were performed at various settings to evaluate the technology’s operation over a range of conditions (see August 2000 FUSRAP Update newsletter for more detail on the process). Approximately 7,000 cubic yards of soil were processed during the demonstration.

The U.S. Army Corps of Engineers conducted the soil processing test to evaluate its potential for faster cleanup and reduced disposal costs during full-scale cleanup of the Maywood site. Samples of the processed soil are currently being analyzed to evaluate the system’s effectiveness and practicality. Results will be made available to the public following regulatory agency review. In the meantime, the soil processed during the demonstration will be shipped off-site to an authorized disposal facility.

Completion of Final Phase I Cleanup
Cleanup of contaminated soil on a one-acre parcel of vacant land adjacent to Route 17 in Rochelle Park was completed in December. Over 4,700 cubic yards of contaminated soil were removed in this effort. Depth of excavations ranged from one to seven feet below the surface. The site was backfilled with clean material, and hay and winter seed were applied to control erosion. The property will be seeded again in the spring. The contaminated soil was trucked directly to the MISS, where it is being safely stored and monitored pending off-site disposal. USACE coordinated this work with local officials, and communicated with neighboring residents and businesses throughout the cleanup. The site was the last remaining property to be addressed under Phase I of the Maywood site cleanup (Phase I addressed mostly residential properties), and is now suitable for unrestricted use in the future.

USACE is proposing a removal action to clean up radiologically contaminated soil at several vicinity properties that will be impacted by highway improvements planned by the New Jersey Department of Transportation (NJDOT). The proposal, known as an Engineering Evaluation Cost Analysis (EE/CA), will outline USACE’s plans to remove contaminated soil from these properties prior to the NJDOT work. Completion of the cleanups would allow NJDOT to proceed on schedule, while ensuring that the affected properties are impacted only once, instead of USACE returning to remove contamination at a later date. All but one of the properties are located in the NJ Route 17/Essex Street interchange area (see map below). This area is the focus of several major improvements planned by NJDOT, including replacement of the Essex Street Bridge and widening and drainage upgrades on Route 17. USACE is also proposing to provide radiological safety support to NJDOT’s noise barrier construction project along portions of Interstate 80 in Lodi as needed.

A draft of the EE/CA is currently undergoing internal review by USACE. The final document will be subject to a public comment period, when the New Jersey Department of Environmental Protection (NJDEP), the U.S. Environmental Protection Agency (EPA), the community, and any other interested parties will be asked for input. After consideration of the public comments, an Action Memorandum formally authorizing the work will be prepared for approval by USACE officials. USACE has briefed local officials on the work proposed in the EE/CA. Briefings focused on traffic management, local permit requirements, and the need for ongoing coordination throughout the work. Should the EE/CA be approved, USACE will also coordinate with affected property owners prior to any soil removal. 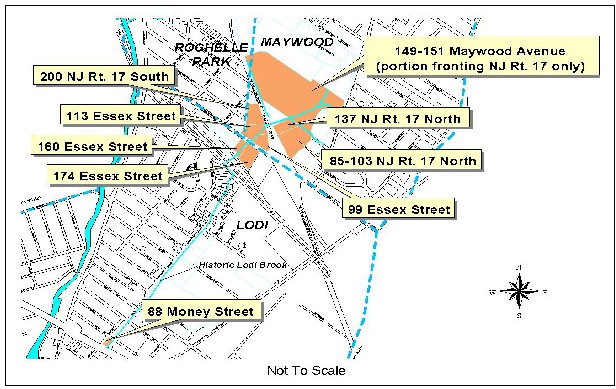 A study to assess potential impacts of site-related contaminants on area groundwater continues. Although groundwater has previously been evaluated at specific locations, the current study is the first site-wide assessment of area groundwater. The work involves installation of new monitoring wells at locations previously untested, and sampling of existing wells. To date, 40 new wells have been installed, and 35 existing wells have been sampled.

Groundwater sample collection at the new wells began in early February and will continue through April. Following the sampling, additional tests will be conducted to assess hydrological conditions in the area, such as the depth to groundwater and the direction of groundwater flow. These tests will continue into May.

The groundwater study is being done under a plan approved by NJDEP and EPA, and both agencies have monitored various field activities. After the data collection and analysis is completed, USACE will prepare a report summarizing the findings. This document, known as the Groundwater Remedial Investigation report, will be reviewed by the regulatory agencies and then made available for public review at the Public Information Center.

Return to Upcoming Events and Announcements